Martin Luther was an Augustinian monk of the 16th century. Like many other contenders of the gospel both before his time and after, he was an imperfect man whom God chose to use in mighty ways.

In 1517, Luther posted upon the door of the Castle Church in Wittenberg (in the manner common to those issuing bulletin of an upcoming event or debate) the Ninety-Five Theses on the Power of Indulgences, what has commonly become known as The Ninety-Five Theses. The contents of his theses challenged the teaching of the Roman Church at that time. The century before the Reformation was marked by widespread disillusionment with the abuse of the leaders in the Roman Church with its false teachings on the selling of indulgences, the treasury of merit, purgatory, salvation through good works, and the authority of the pope. Reaction to Luther’s Theses was immediate and strong, leading to his excommunication from the Roman Church and the eventual birth of the Protestant Reformation. This Reformation was more than just to a protest against church-wide corruption. It is also hailed as the rediscovery of the doctrine of justification—salvation by grace alone through faith alone in Christ alone. Luther’s historically important defense of the gospel is noted and celebrated annually on 31 October, Reformation Day.

A short few years later (in 1520), the pope issued a bull decree, calling Luther’s teaching poisonous. He demanded that Luther recant in 60 days or be excommunicated. Instead of acquiescing this request, Luther publicly burned the pope’s bull decree.

Luther would have normally been executed for his actions; however, Friedrich the Wise demanded a hearing before a German court. In 1521, Luther was summoned to the town of Worms to appear before Charles V, ruler of the Holy Roman Empire. Luther was commanded to recant of all his teachings against the Roman Church. Luther requested one day to think through his position. After one night of prayer and pleading with God, Luther returned to the Diet of Worms and declared the following: 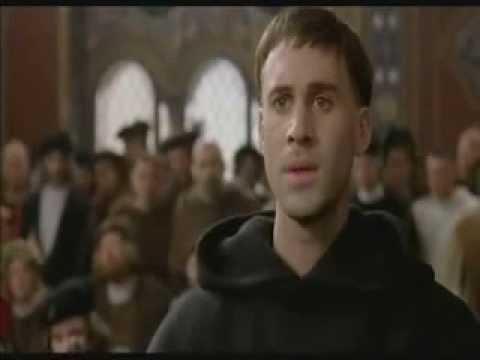 Since then your serene majesty and your lordships seek a simple answer, I will give it in this manner, plain and unvarnished: Unless I am convinced by the testimony of the Scriptures or by clear reason, for I do not trust either in the pope or in councils alone, since it is well known that they often err and contradict themselves, I am bound to the Scriptures I have quoted and my conscience is captive to the Word of God. I cannot and I will not retract anything, since it is neither safe nor right to go against conscience. I cannot do otherwise. Here I stand. May God help me. Amen.

[This post is adapted from the BLB commentaries page]